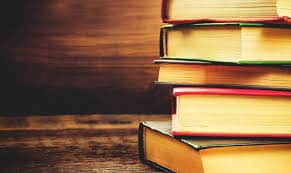 I have to admit that up until a few summers ago whenever psalm 136 rolled around in the breviary, I would sigh from boredom. “Not this one again…” In community we try to make it less repetitive. “Okay, Simona will read the first half and the second half we will respond to Francesca.” But, I heard a meditation once, the content of which I don’t remember, but I remember that one of the suggestions for going deeper into the meditation was to pray with psalm 136 and to make it our own story. What has the Lord done in my life that makes me exclaim that His mercy endures forever?

This meditation is an attempt to answer that question. I think that in order to be able to rewrite our own history through the merciful eyes of God, we need to learn how to read our story. Scripture is the perfect tool to teach us how to read our own past because it contains history but is also literature. But, to appreciate the history, we have to learn how to read a good story, and secular literature can help us in that. I would like to propose that literature can help us understand our lives and thus help us to dive deeper into Scripture, which in turn takes us deeper into our own lives.

What makes psalm 136 so great? First of all it’s a great story! Starting with creation, it recounts the whole history of Israel up until the arrival in the Promised Land. We might not know instinctively the weight of what it means to slay Og the king of Bashan, and maybe the Israelites didn’t either, but Israel certainly knew the story of the miraculous Exodus from Egypt. It was a story that was told and told again.

Not only did Israel know its story, it also knew how to read its own story with the eyes of God. They are not the protagonists of their own history, God is. And not only do they recognize that His hand is present in all that they do, they know why: because He is merciful.

Israel’s history is not just their story; it’s our story, too. The whole Bible is our story. And it doesn’t end with the last page either. All of history leads up to this very moment.
Do I know how to read my story? Do I know how to recognize the mercy of God in my life? If I don’t know how to see God’s merciful hand leading my life, how can I help others come to know it? We Apostles often suggest a concrete resolution at the end of daily meditation as a means of making our prayer life translate into our daily lives, but do we know how to translate our daily lives into prayer? Do we know how to relate with God in our daily lives or rather how he relates to us through different events? We need to learn how to read scripture and to read our lives. We need an exegesis of life!

Fr. Ermes Ronchi, in the spiritual exercises that he preached to the Pope and the Roman Curia this year, “The Naked Questions of the Gospel,” quotes a rabbi talking about his formation experience. He says,
“If I went to the teacher it wasn’t to learn concepts or ideas, if I went to the teacher it was to see how he puts on and takes off his sandals,” to learn how to live from him – an exegesis of life! – to learn from his smallest gestures the correct relationship with things, with creatures, with ourselves, with God. To learn the wisdom of living: how he works, how he eats, how he loves, how he laughs. The Christian truth is not expressed in your doctrine but in your correct and harmonious relationship with things, when you are a person that passes free, regal, beneficent, and happy among things. “Not from how you talk to me about God, but how you talk to me about the things of life I understand that you are a person that has known God” (Simone Weil).

How do we know about the things of life? How do we learn the exegesis of living? How do we, like Israel, see the merciful hand of God leading our lives? I would like to propose literature as a key tool to help us to read both Scripture and our lives.

Really great literature teaches us about reality. Some people think that reading can be a form of escapism, but a really good book takes hold of us and doesn’t let us go. It drags us back into our reality, usually when we don’t expect it.

I once memorized the poem “An Elegy Written in a Country Churchyard” by Thomas Gray. I remember the professor that helped me to memorize the poem told us about how literature, and poetry in particular, dwells in us. It waits until the perfect moment to come back to the surface and finally we understand it. I understood what he meant with this stanza of “An Elegy Written in a Country Churchyard.”
Full many a gem of purest ray serene,
The dark unfathom’d caves of ocean bear:
Full many a flow’r is born to blush unseen,
And waste its sweetness on the desert air.

Literature can help us see the world with new eyes. It teaches us about the mystery that there is in each one of our lives. Great literature can put words to experiences that we never could have identified otherwise. It is a silent teacher that remains with us until the moment is right to reveal a truth that we had known all along. It opens us up to the unknown future. It helps us to enter into the logic of mercy.

A few years ago, there was a young woman in community with who I formed a quick, easy and deep friendship. She taught me about love and life and more importantly she brought me closer to God. As our friendship grew, her discernment continued and one day she realized that God was not calling her to be an Apostle of the Interior Life. The Lord had prepared me for that moment; I was able to understand that she had an immense gift to give to the world and that if He was not calling her to the Community it would be because there was something better in mind for both. But, what about me? Why had the Lord suddenly taken away this gift that He Himself had given me? I began to read the book “A Severe Mercy” by Sheldon Vanauken because I heard that it was about a man grieving the loss of his wife and thought it might be helpful in my separation from my friend.

Sheldon and his wife, Davy, are not Christian when they meet but are madly in love with one another. The only thing that matters for them is their relationship and making sure it lasts. As they go through life, they eventually convert to Christianity, Davy readily and Sheldon not so readily. Their relationship is strained by the intensity of Davy’s love of God and by Sheldon’s inability to correspond. Davy becomes sick and dies while Sheldon is still grappling with Christianity, and so his belief is shaken to the core. The end of the book is his coming to realize that her death was not an act of a cruel God but a providential Father.

“That death, so full of suffering for us both, suffering that still overwhelmed my life, was yet a severe mercy. A mercy as severe as death, a severity as merciful as love.”
Sheldon realized that he was jealous of God, that if he had to choose between God and Davy, his wife, he would have chosen his wife. He didn’t like that God had taken first place in the heart of Davy. And he realized that her death was the only way for him to realize that. God in His mercy, was teaching him about His infinite love and how to reprioritize his life.

When I read this book I realized that maybe there was a severe mercy in my suffering as well. I didn’t understand the “why” like Sheldon had, but I had hope that at least there would be a “why.”

Israel understood this, too. The author of psalm 136 summarizes it in two lines:
who led the people through the desert, for his mercy endures forever;
Israel had a terrible time in the desert! They complained the whole time! They suffered. They wanted to go back to Egypt. But they were led through the desert because God in His mercy had a greater plan. Maybe we find ourselves in the desert now or maybe we haven’t found out why we had to pass through a certain desert, but we can say with confidence that God’s mercy endures forever.

All of salvation history is the story of God’s mercy. If literature opens us up to the reality of God working in our lives, Scripture brings it to a whole other level. There’s a quote by Fr. Jean Sonnet that summarizes perfectly this difference in quality between literature and Scripture.

Is that not the logic of mercy that the Gospel teaches us? When all seems lost, when it seems like we have killed the God of Life, there’s more to the story. Out of all of the possibilities, God does the impossible. When Peter thinks that that’s it, he’s denied his best friend and he’ll never be able to change that, he’s given the opportunity to reaffirm his love for him three times. What seems like just a piece of bread and a cup of wine is actually our Trinitarian God.

What does Jesus say the night of his Last Supper? He says, do this in memory of me. He begs us to remember. Remember what I’ve done for you. Tell the story over and over again. Live it over and over again. It doesn’t end here. Keep remembering and keep living the story. Is that not worth shouting to the whole world? Look what the Lord has done for me. His mercy endures forever. I thought that all was lost. I was weak and wounded. He remembered me. He freed me. He has thought of me from the beginning of time. He gives all that I need. He gives his very Self to me for His mercy endures forever.

Concrete Resolution:
Don’t be afraid to tell your story. Don’t be afraid of your faults and your wounds. Those are the Lord’s battleground, where He is present and active. That is where the Lord is merciful. That is what people need to hear. Use literature if necessary. 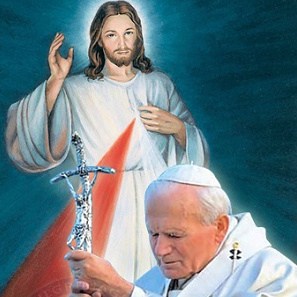 Dear John Paul II and Sr. Faustina, This past summer I saw you both painted in Cracow, under the rain that gushes...