Saints | Series: Year with the Saints 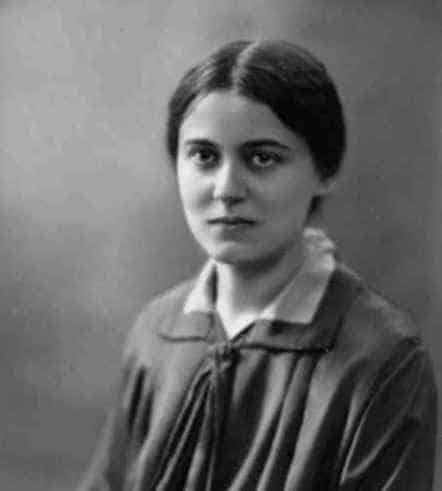 St. Teresa Benedicta of the Cross: Apostle of Womanhood

Have you ever been pursued by a Saint that wants to be your friend? C. S. Lewis says “Friendship is born at that moment when one person says to another: ‘What! You too? I thought I was the only one.” I had that same reaction when I found out that I was born on the feast day of St. Teresa Benedicta of the Cross, better known as Edith Stein.
We have so much in common! I grew up in a family that encouraged me as a young girl to be anything that I wanted to be as an adult. I loved learning as a kid, was gifted with intelligence, and wanted to put it to use by seeking a doctorate in Microbiology, a field with few women.

Edith Stein was also a very gifted scholar. She had a rough go in her access to education but eventually got a doctorate degree in Philosophy, one of very few women at the time to do so. She was denied a chair twice at two universities because she was a woman, but eventually held lecturer positions and began to make a name for herself through her conferences and academic research, particularly on the essence of womanhood and empathy.

I grew up in a Catholic home, and in college I began to be interested in other religions to better understand people and how they make decisions. I was convinced that our deepest held convictions, and thus what drives our decisions, are ultimately religious. I wanted to know how people from different religions can come together and have a mutual comprehension even in their differences.

Edith grew up in a Jewish family and she eventually encountered Christ after reading St. Teresa of Avila’s autobiography. She was baptized into the Catholic faith and knew that the Lord was calling her to consecrated life. After her conversion, she never denied her Jewish roots and considered herself a Jew until her death. She even took a vow in her later years, as a Carmelite sister, to be able to give her life for her Jewish people. And the Lord granted her prayer: she was killed in the gas chambers at Auschwitz at the age of 51 on August 9, 1942.

A few years ago on her feast day and my birthday, I was contemplating her martyrdom and her love of the Cross. I was thinking about how the Lord had been showing me the hidden fruitfulness of death in that season of my life. In the previous months, a young wife and mother had died suddenly after a short battle with cancer. I did not know her personally, but we prayed for her and her family as a Community all throughout her struggle. At her funeral, it was easy to think about the pain that her family would now have to go though at her seemingly illogical death. Then I remembered that that same day my friend, Franco, was making professing his solemn vows. I felt that he was supposed to be entrusted to Kathy’s care. How strange that this young American wife and mother was now eternally connected to a future priest from Brazil!

The same is true of a couple that died in a tragic plane crash that same year. Again, I did not know them, but I found myself at their funeral during a retreat in their parish. The homily of the celebrant was the catalyst for a moment of great healing for me that came from that retreat. If they had not died, I would not have heard the words that led me to a deeper intimacy with the Lord. Again, a great tragedy had brought about the gift of life.

Then there was the death of Jack, an elderly Texan and fellow pilgrim to the Holy Land. I will never forget his perseverance in fighting his way through the crowded streets of Jerusalem with his walker. I could not be at his funeral because I was in Italy, but that same day there was the baptism of a little girl while I was at Mass. Again, I knew that I needed to entrust little Athena to Jack, a young Italian baby girl to an old American ex-submariner.

All of this was running through my head as I prayed about St. Teresa Benedicta’s death.

We love Edith for what she did during her life, but perhaps we love her more for her death. Did she know she was going to die that day? Did she believe that she was really going to take a shower? She had asked the Lord to be able to give her life for her Jewish people. Somehow I imagine her naked and scared holding her sister’s hand (who had also converted to Catholicism and had been arrested by the SS) as she walked into that room. Did she realize in that moment that He was fulfilling her prayer? Or did it seem like any other moment?

I think that the hidden fruitfulness of all of these “pointless” deaths is like the extraordinary hidden in the ordinary of all of Jesus’ gestures. For example, when he went down into the Jordan, a muddy, murky river in the middle of the desert, did the crowd understand the universal and eternal significance that simple bath would have? How much did they understand after the Heavens opened and the Father spoke? How much more of a waste must His death have seemed, a rising leader killed mercilessly in the prime of His life.
I think all of this must be true at least to some extent in every moment in of our lives too. What extraordinary work is the Lord bringing about in the ordinary thing that He asks me to do? As I write this, my heart longs to be fruitful, to be a spiritual mother to many children, to do something great with and for the Lord, like St. Teresa Benedicta. Yet, I find myself behind my desk again after a month in silence and solitude in this same spot studying for finals in my last year of Theological studies. When I don’t understand, when my mission is not clear, in whatever feels like a death and a waste and a tragedy, let me remember the extraordinary power to bring about life that lies beneath the ordinary. (Even if that looks like studying.)

Edith was a woman of extraordinary courage, blazing trails in so many ways: getting a doctorate when women usually did not, converting to Catholicism when she knew her family would not approve, being involved in politics to fight for women in the workforce, giving conferences on what it means to be a woman and showing it through her life, waiting for eight years to enter Carmel in obedience to her spiritual director who told her that the world needed her first, losing her job because she was a Jew, writing to the Pope to urge him to speak out against the atrocities of the Nazi regime, and eventually winning the martyr’s crown.

But, her life was made up of simple, daily moments, just like yours and mine.

I pray, through the intercession of St. Teresa Benedicta of the Cross, to be able to receive the unexpected and ordinary moments of my day as an invitation to live the extraordinary in the ordinary with love and courage.