Synod on Young People, the Faith, and Vocational Discernment 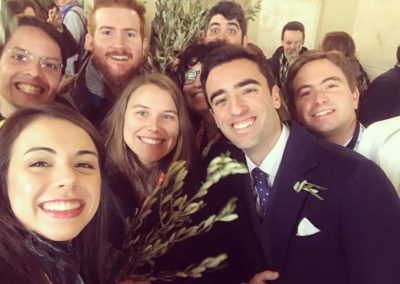 The social media team carried in palm branches for the Palm Sunday celebration with Pope Francis. 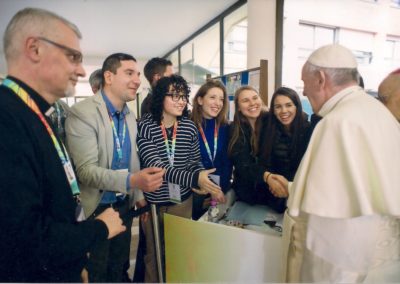 Briana Santiago (stripes) and Cherise Klekar (shaking the Pope’s hand) got to meet Pope Francis on Monday of the Pre-Synodal Meeting. 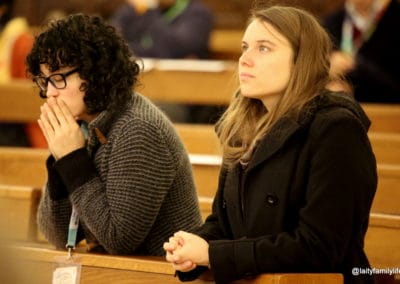 Briana and Cherise praying in the chapel during breaks. 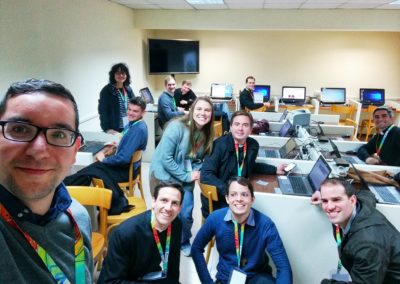 There were six groups of social media teams in English, French, German, Spanish, Portuguese, and Italian. 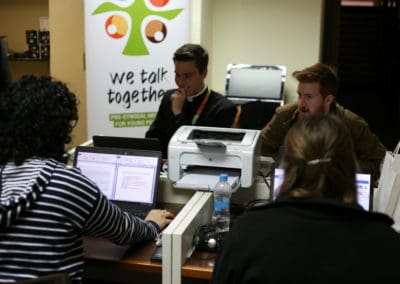 The English social media team included Briana, Cherise, and a seminarian and a married layman from London. 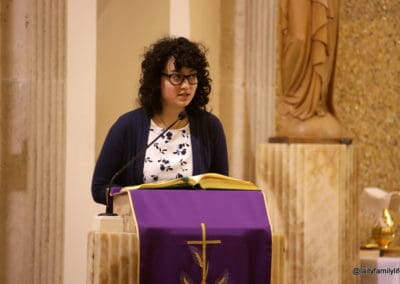 Both Briana and Cherise were heavily involved in the Pre-Synodal meeting. Here Briana is reading at one of the morning Masses. 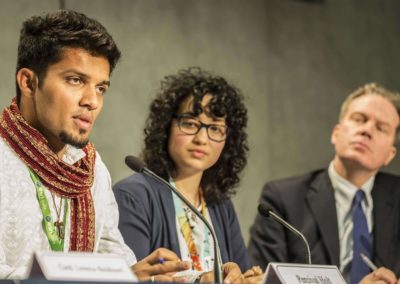 After the release of the final document, Briana participated in a press conference about the experience. 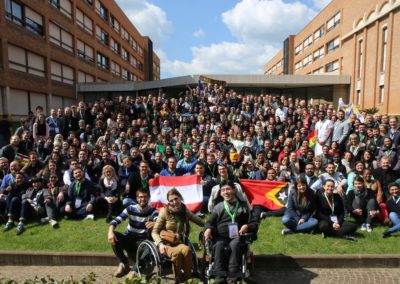 Nearly 325 young adults from all over the world and of all different religions were given a voice in the Pre-Synodal Meeting.

Synod on Young People, the Faith, and Vocational Discernment

“If the whole world keeps quiet and loses its joy, I ask you: Will you cry out?”

With these words Pope Francis addressed all young people on Palm Sunday in St. Peter’s Square. Among this crowd were around 325 young adult delegates gathered in Rome from all around the world to participate in a Pre-Synodal Meeting in preparation for the Synod of Bishops on Young People, the Faith, and Vocational Discernment which will be held this October.

The meeting itself was held from March 19-25 culminating with the Palm Sunday Mass at the end of which the delegates presented to Pope Francis a document drafted from their reflections of the week which will be one of four main documents considered in the Synod held this October. Hoping to truly enter into the topic and discover where the Holy Spirit is leading the Church in regards to her young members the Pope and Synod Fathers decided to call in the experts: young people themselves!

But for the Pope, 325 young adult delegates representing their part of the world was not enough. It was not even enough that these 325 where all from different backgrounds and faiths including Catholics, non-Catholic Christians, atheists, and members of other religions. He wanted to extend the opportunity to enter into this dialogue to all young people and he recognized the potential of today’s technology to make it happen. Two of the girls in formation with the Apostles of the Interior Life, Briana and Cherise, were present at the Pre-Synod Meeting as members of the social media group that moderated various Facebook groups in six languages with participation from around 15,000 young people. In the English group, Briana and Cherise, along with two young men from London, found themselves as moderators of more than 2,000 participants.

The goal of the week was to reflect upon 15 questions in three key areas: The Challenges and Opportunities of Young People in the World Today; Faith and Vocation, Discernment and Accompaniment; and The Church’s Formative and Pastoral Activity. For the delegates physically present in Rome this happened in 20 linguistic discussion groups; for the online participants, through Facebook posts and comments. Each of these 26 total groups, after sharing, debating, and reflecting, submitted a summary of their responses to a small writing team selected from among the young people present. This writing team, with much patience and skill, wrote and translated a document based on these summaries. The document was made in three drafts, each of which was read aloud in the main conference room where it was then discussed, criticized, and ultimately sent back to the writing team who tirelessly returned to their desks until Saturday morning when a large majority approved the document for presentation to the Pope.

Notwithstanding the much “work” involved, the young people lived the week as young people know how: with lots of fun. In a press conference following the presentation of the document Briana shared about her experience:

“For me personally, this has been an incredibly enriching experience. I have sat down to meals where each person at the table came from a different country, but all shared in the universal desire to know and be known, to share and to receive. There has been a joy permeating the air here that could be heard in the laughter, the songs, and the chatter during breaks. The friendships that have been born these last five days shall not be easily forgotten.”

For the community of the Apostles of the Interior Life, the possibility to have two girls in formation present at this historic event was very enriching both because of the ability to share from the Community’s own experience of working with young people as well as to receive from the many other beautiful charisms in the Church. Cherise was particularly struck by these encounters:

“At the end of the week, kneeling in our chapel I looked up at Jesus and thought ‘wow, You’re beautiful.’ Meeting so many different people and charisms, I was able to contemplate new aspects of the Face of God that I had not yet discovered. This week was an Apostle’s dream: an event center filled with joyful young people, each eager and open to enter into meaningful dialogue. If not for my desire to go out and share about this experience, I would not have wanted the week to end!”

At the beginning of the week Pope Francis implored the young people to take a risk and speak out without holding back; the Church desired to hear what was authentically on their minds and in their hearts. This push to peaceful and sincere dialogue is important for all of the Church which is made up of both young and old alike. In a world torn by the inability to accept and enter into dialogue with that which is “other”, much can be learned from this joy-filled week that was lived in an atmosphere that truly celebrated difference and sought the common good. In this light, Pope Francis’s Palm Sunday message can be extended to all people and not just the young: “You have it in you to shout.  It is up to you to opt for Sunday’s “Hosanna!”, so as not to fall into Friday’s “Crucify him!”…  It is up to you not to keep quiet… Please, make that choice, before the stones themselves cry out.”

The final document of the Pre-Synod in English

The summaries from the 26 groups

For press coverage of the Pre-Synod Meeting: