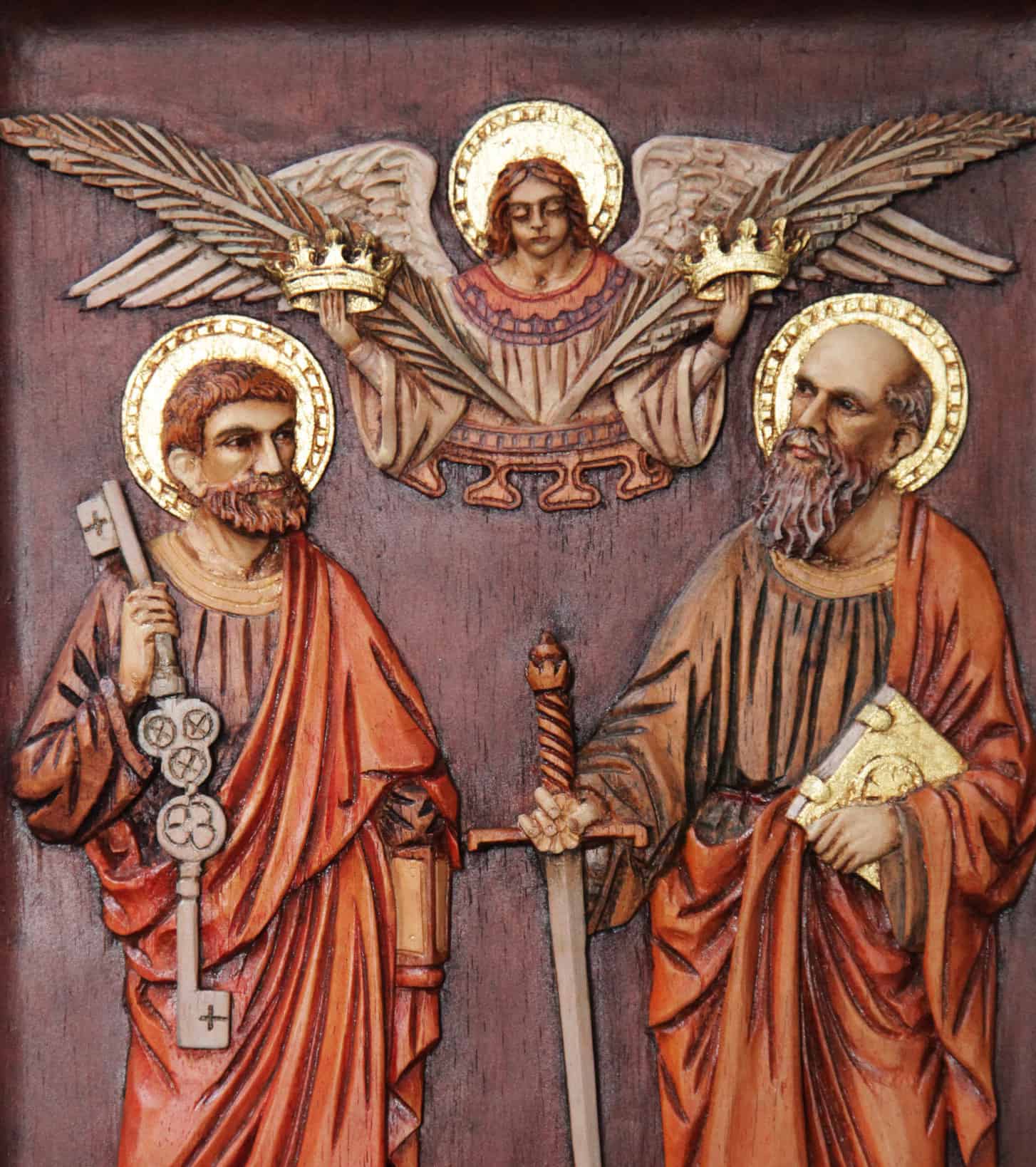 Peter and Paul: The Two Pillars of the Church

In the month of June we will celebrate the great Solemnity of Saints Peter and Paul. Who more than they can be numbered among the friends of God? Surely they are two of the closest and most intimate friends! Why are they so important? Why do we celebrate them together? We can let the preface from the Mass of this Solemnity tell us:“You (God) desired to unite in joyous fraternity these two holy Apostles: Peter, who first confessed faith in the Christ, Paul, who illuminated the depth of the mystery; the fisherman of Galilee, who founded the first community with the just of Israel, the teacher and instructor, who preached salvation to all of the gentiles. In this way, with different gifts, they edified the one Church, and associated in the veneration of the Christian faithful, share the same crown of glory”.

Peter and Paul, the two pillars that bear the load of the Church. Two very different stories, two very different vocations, two very different personalities, yet one love, one foundation: Jesus Christ. One and the same epilogue: “the greatest love, to lay down ones life for ones friends” (Jn 15,13), love unto martyrdom. Peter the head of the Apostles; Paul, self named “the” Apostle even though not one of the twelve. Peter: the rock, the solidity, the authority, the pure and simple faith; Paul: the witness, the zeal, the learning, the convinced and “reasoned” faith. The Apostle of the sheep of Israel; the Apostle of the sheep of Israel dispersed in the Diaspora. The family that first met Jesus in the streets of Palestine; and the family that then opened itself to every nation, “to the ends of the earth” (At 1,8). Peter: the father, the pastor, the pontiff; Paul: the brother, the friend, the model. The Lord chose Peter and Paul, two men apparently so distant, so diverse, yet so intimately similar in their faith in Jesus!

Two great saints, two great men! Yes, we must always remember that the saints are just like us, with our weaknesses and defects. The aspect that makes them holy men is their great and sincere love of God. Let’s look at Peter. So many mistakes! So many defects! The Gospels themselves tell us: he doesn’t understand the words of Jesus initially, he is reproached many times, he even denies Jesus, he isn’t present at the foot of the cross … and yet to him Christ entrusts his entire Church! Why? Because the love of God, his mercy, go much beyond human misery! Any mistake we may have made in our life, it doesn’t matter, once it is understood, once we have humbly repented in our heart, we are made new in the infinite love of God. It is the vivifying power the we find in the sacrament of Reconciliation. Peter denied Jesus, a grave sin, the denial of a friend! Yet when he sees the face of Jesus in the courtyard of the high priest, there he encountered Mercy, he burst into tears, recognized the gravity of what he did, and repented and in so doing reopened the heart of Love. This is the secret of forgiveness! From that moment he was another man, the Peter that we venerate!

Paul shows us these things clearly with his life. Perhaps we can’t quite call him a killer, but how many people must have died or must have been condemned because of his pharisaic zeal against the Christians! Think of the martyrdom of Stephen, he was there, consenting. Did all of this impede him from becoming the saint that we now know? No, because he too encountered Jesus and was converted, he encountered him so deeply in his life that he became similar to him in his body, with the great gift of the stigmata! We all are sinners, we all are lacking in some aspect of our life. We all are in need of conversion, of forgiveness. And we all are called by God to do great things. We all are called to holiness, to become saints. What is greater than holiness? To be holy doesn’t mean being exactly like Peter the head of the Church or like Paul the indefatigable missionary, it doesn’t mean dying crucified upside down or decapitated, in Rome, martyrs to give witness Christ to the last drop of blood! Being holy is open to everyone, no one is excluded, and it consists “simply” in imitating the love that Peter and Paul had, their faith, their certain hope, their humility. God probably is not asking us to be martyrs, but he is asking us to die every day for him, what does this mean? It means every day overcoming ourselves, our vices, our faults, our sins, our weak side, in order to make ever more room for God, for his sanctifying action. We become saints in the little daily actions: a friend raises his voice, and I don’t raise mine but stay calm; I don’t fell like finishing that tiring job, but I do it anyway offering the effort to the Lord. To smile, to always smile, even when it would be easier to be rude, closed, polemical, remembering the words of blessed Theresa of Calcutta which is also my special wish for you all: “We must always smile and be joyful. He who gives joy is he who gives more and God loves those who give with a smile on their lips. He who is full of joy preaches without preaching”. Saints Peter and Paul pray for us!