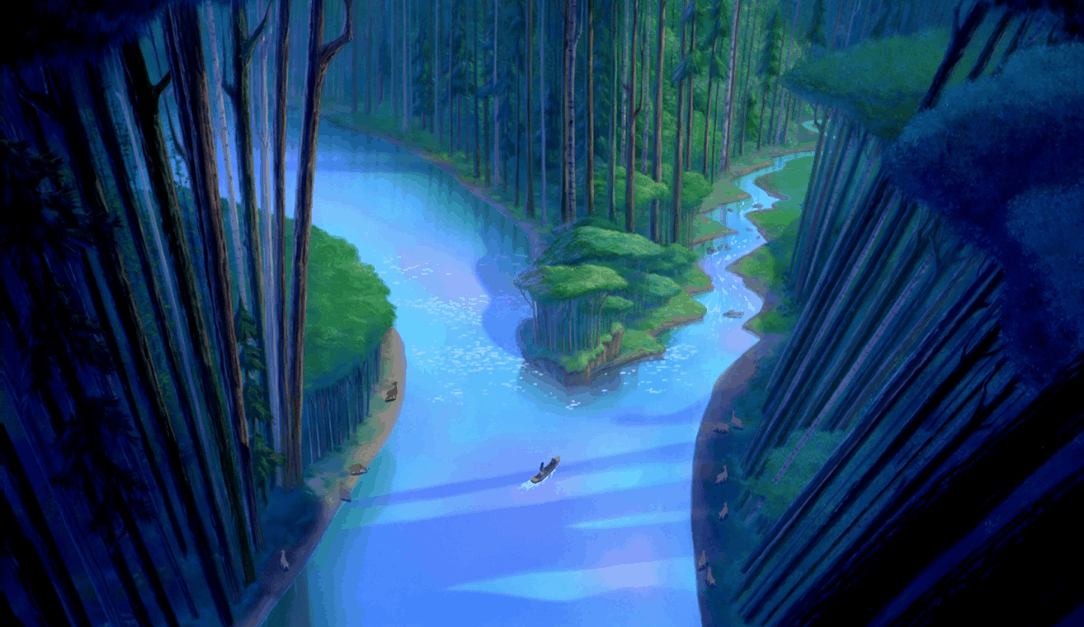 Just around the river bend

This last month we found ourselves on a mesmerizing path in the mountains, discovering the beauty of creation with every step and with every turn. I propose that we continue our adventure, but this time discovering a New Land.

For those who have never seen Walt Disney’s Pocahontas, we are told the story (in a roughly accurate historical representation) of a group of European explorers who, in their search for the much pursuedgold of North America, happen upon the Native Americans of the new world. While there is a plethora of themes offered us in just ninety minutes, originally designed for a younger audience, I desire to reflect on a scene that we are introduced to towards the beginning.

Pocahontas is the onlydescendant of the Chief of their tribe. After her father returns from a long trip away, he announces proudly to his daughter that the most fierce warrior has asked for her hand in marriage. He explains that Kocoum is strong and faithful, and that a life by his side would certainly keep her out of harm’s way. Surprised by the news, and not knowing how to respond to her father’s request that she take her place among their people, Pocahontas takes refuge in her canoe and sings this song as she races down the river:

But people, I guess can’t live like that We all must pay a price

To be safe we lose our chance of ever knowing

What’s around the river bend

Waiting just around the river bend

I look once more just around the river bend

Beyond the shore where the gulls fly free

Don’t know what for

Can I ignore that sound of distant drumming

For a handsome sturdy husband who builds handsome, sturdy walls

I look once more just around the river bend

Beyond the shore Somewhere past the sea

Don’t know what for

Why do all my dreams extend

Should I choose the smoothest course

Steady as the beating drum

Is all my dreaming at an end

Or do you still

Wait for me Dream giver

just around the river bend”[1] 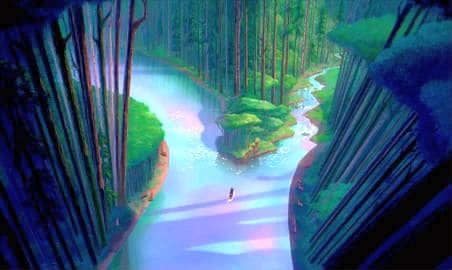 Knowing that the Dream Giver waits for her just around the river bend gives Pocahontas the courage to choose a course, even if the destination is still unclear. We are never told that marrying Kocoum would be a mistake, but that inaccepting a decision already made for her, something safe and without risk, she would ignore the Voice that was whispering to and guiding her heart. As the song is ending, we see Pocahontas in front of a fork in the river and with the final note she veers her canoe towards the less-steady waters on the right, and in this case, the narrow path (see photo above). Driven by a strong desire to meet and to know this Dream Giver, and unable to ignore Him any longer, she embarks on the adventure of a lifetime.

If however she had not decided to go forward, to discover, to risk, to try something new, the film would have ended right there, motionless in front of the never-ending great divide.

“A decision needs to be proven by facts to see whether it is a right decision. A choice cannot remain imprisoned in an interiority which is likely to remain virtual or unrealistic — a real danger accentuated in contemporary culture — but is called to be translated into action, to take flesh, to embark on a path, accepting the risk of a confrontation with the reality which caused the desires and emotions. Other desires and emotions will arise in this stage; “recognizing” and “interpreting” them will allow the possibility of seeing whether the decision is good or whether it is advisable to re- evaluate it. Consequently, “going out” is important, even with the fear of making a mistake, which, as previously seen, can be crippling.” [2]

It is not enough that we learn the art of recognizing the presence of God, but we must go one step further to put his Word into action: a step that allows us to walk with and for Him, like the Magi we encountered during the Epiphany mass this last month. These Magi risked significantly, and they traveled a long distance not knowing for certain their actual destination, but in the end they met our Lord, the Dream Giver! We are all a people of faith and of works, of reflection and of action.
But where does the courage to say “yes,” to risk, to choose a path or to make a decision come from? Without doubt it comes from the Fount: from the encounter with our God, the God of Abraham, Isaac and Jacob.

I remember, during my college years in Texas, the agonizing beauty of my lengthy vocational discernment. At the beginning, the strength of my desire to make a decision was so heavily guided by my own will (and my will alone) that at a certain point my spiritual director looked at me and said: “Briana, are you praying?” The response to this question should have been immediate and obvious, but it was not as such for me. I was not drawing from the Fount, but was trying to create water on my own in order to satiate my thirst. How can we know our dreams if we know not the Dream Giver? How can we know that for which we are created if we know not the Creator?

For the most part, I followed the emotions or small inspirations that I perceived in prayer. While my imagination soared, my need to have everything under control (and perfectly organized) contributed to, without a doubt, all of the difficulty I was experiencing. Before Christmas of my last year in college, I attempted to explain to my spiritual director a very strong sensation that I had of being on the edge of an outrageously high cliff, so very close to the next step, but in which direction I was completely unsure.  I felt as if I was fast approaching a decision but had not the strength, nor the courage, to launch myself into the abyss that lie before me. As stated in the quote above, I was afraid to make the wrong decision and so I remained crippled there on the edge of this “interior cliff.” I remember my spiritual director then said, “Briana, now that you are going home for Christmas break, I want you to pretend that you’ve already made a decision. Pick one vocation and live as if it were yours, and pay attention to what your heart tells you as each day passes.”
“Other desires and emotions will arise in this stage; “recognizing” and “interpreting” them will allow the possibility of seeing whether the decision is good or whether it is advisable to re- evaluate it.” [3]

How often it is in our actions that we discover what the next step is! In fact, my time at home “pretending” to know my vocation was the first time all the theory that swam around in my thoughts became something more concrete. I cried, I laughed, I felt fear, and I felt an immense joy that became “a light for my path” (Ps 119, 105). I came back from the break ready to “jump,” to take my canoe and paddle on through the rapids. Towards what exactly, I wasn’t so sure, but I understood in the deepest part of my being that I could no longer be still.

What lies just around the river bend?
Only he who continues to walk down the path, or in this case canoe down the river, will ever find out.

Concrete Resolution:
This month, in an area in which I feel I am struggling to make a decision, where I feel stuck, I will take a couple of days to “pretend” that I have already chosen and then bring everything that surges in my heart to the Lord in prayer. With Him, I will make an act of trust in His providence before I continue my journey.

One of the blessings of living in Rome, the heart of the Catholic Church, is the possibility of attending Mass at the... 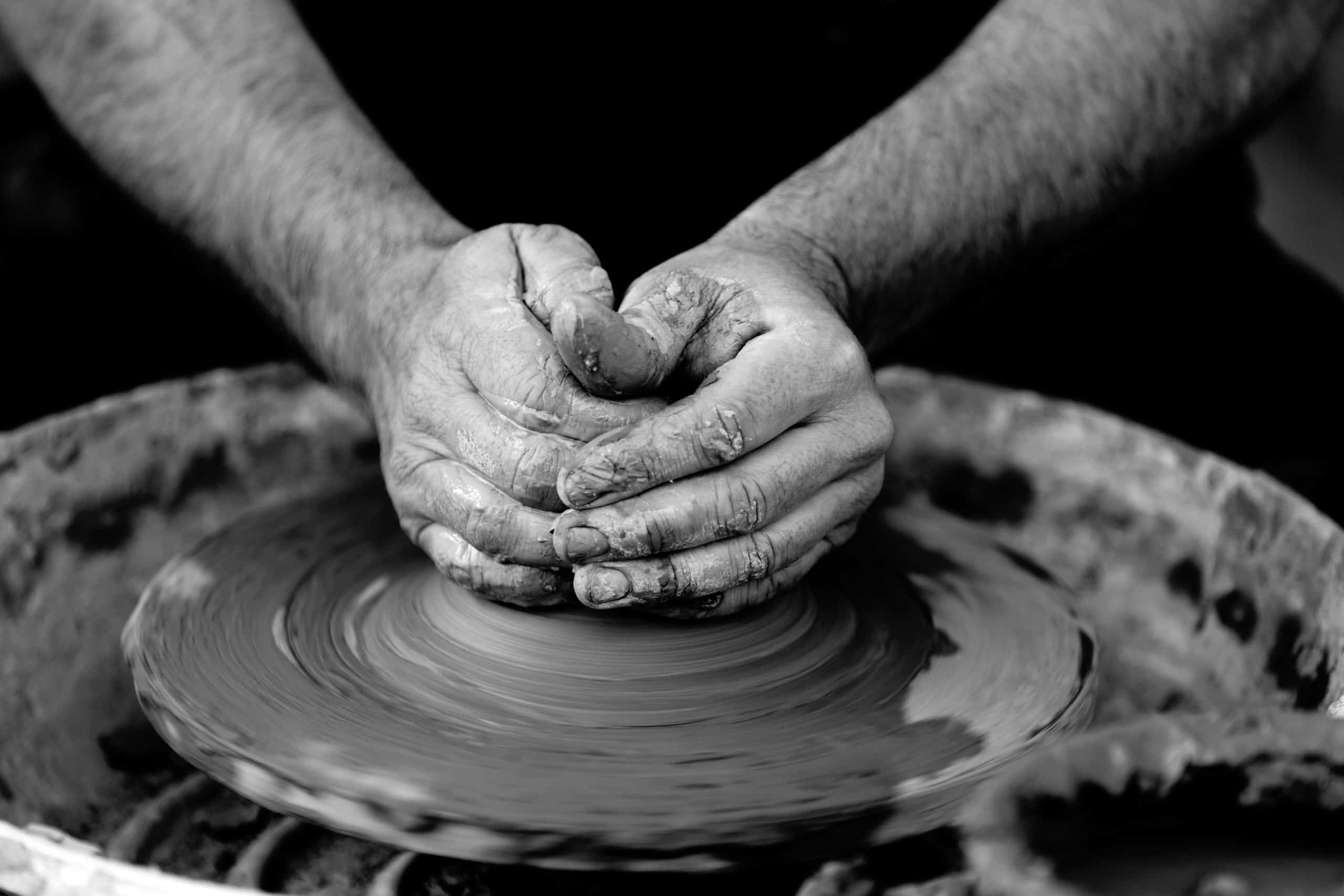 I was born and raised in a culture, a country and in a family that not only honor, but rewards those who are...