Eucharist | Relationship with the Father 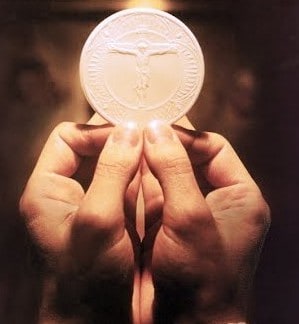 Give Us This Day Our Daily Bread

“The Body of Christ.”
“Amen.”
Is it really you, Lord?
Is it really you, Lord? In this little Host, in my hands, in my mouth, like a vulnerable child you let yourself be taken. You appear so silent, so still. And yet I look at you and know that you are the Word of God. “For what great nation is there that has gods so close to it as the Lord, our God, is to us whenever we call upon him…?” (Dt 4:7)

In this miraculous combination of bodies and souls, Jesus gives himself to us: to me, to you. The infinite enters into the finite, God into man, eternity into time. God in us, every day, “daily bread.” I have a very vivid image in my memory. Greedy to capture imagines as if they were “take out food”, a tourist immortalized with his camera paintings, statues, the tabernacle and ceiling of an ancient church. He did it with the superficiality of who distractedly inserts the ticket into the machine of the public bus. He turned from one side to another, without stopping even for a moment: it was enough for him to take pictures as fast as possible. He didn’t know how to be awestruck, how to stare with his mouth open looking up. The logic of possession doesn’t allow him to go beyond, to capture the invisible. Perhaps he’ll never download those pictures on his computer, he’ll never look at them again, but he’s happy to have taken them, to have taken away the most possible. I then ask myself: are we still able to be amazed going beyond the appearances? Or are we so used to taking that we don’t know how to cry and rejoice in front of mystery, in front of a God who makes himself present in a piece of bread?

“You probably know the tradition of Provence that places in every nativity scene, between those who come to visit the newborn Baby, the character called the amazed one: he doesn’t do anything but admire the positive side of everything. He comes to Jesus with empty hands and everyone reprimands him, but Our Lady tells him: “Don’t listen to them. You have been sent to earth to be amazed: you have fulfilled your mission and you will have your recompense. The world will be amazing, as long as there will be persons like you, able to be amazed”(R. VOILLAUME)

Amazement isn’t finished in a second; it leaves you breathless for a few moments. After letting ourselves be amazed again, as if it were the first time, we too want to stay. Stay a bit longer with Him and ask insistently: “Give us this day our daily bread.” A “this day” without Jesus is a day submersed in preoccupations that, like a spiral, drag us into the darkness of  meaninglessness and tiredness. The “today” with the Bread of Life, instead, is a today nourished, upheld; a “today” in which we can look, touch, speak and listen like God who is in us. Our eyes, therefore, will be able to go beyond what appears to our senses; in fact, “God doesn’t see as man sees, because mans sees the appearances but the Lord looks into the heart.” (1 Sam 16: 7) Our speech will be edifying, our listening merciful; we will touch things not to possess them with greed, but to use them in freedom and to serve the others. All of this is given to us with the Eucharist: “Behold, I make all things new.” (Rev 21: 5)

Resolution:
Stay for a while after receiving the Eucharist, don’t hurry away. Let yourself be amazed by the miracle of Eucharistic Bread and ask the Lord to transform you into Him.